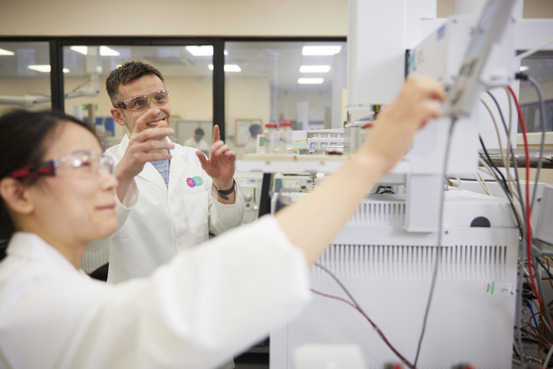 Pharmaceutical products interact with a variety of manufacturing and Container-Closure System (CCS) components during their shelf lives, which may migrate into the pharmaceutical product. Migratory species may be benign or toxic. They could also react with the Active Pharmaceutical Ingredient (API) or excipients within the product. This could affect product efficacy or, in a worst-case scenario, generate by-products which render it unusable.

The Food and Drug Administration (FDA) and European Medicines Authority (EMA) require an assessment of these component-product interactions, to identify and assess any toxicological risks which consequently arise. These are addressed via extractables and leachables (E&L) studies.

Extractables and Leachables Studies - A Route to Toxicological Evaluation

Extractables are species migrating from manufacturing and packaging components during forced extraction. Leachables are species observed in the product under the gentler conditions of on-shelf storage and should have been observed in the preceding extractables study.  In reality, unique leachable species are also observed, such that the two species subsets do not fully overlap (Figure 1).

Figure 1:       Relationships between extractables and leachables

Leachables migrating from manufacturing and packaging components must be identified and monitored over the shelf life of the pharmaceutical product. This permits toxicological assessments to be made, ensuring patient safety.

Key to this are Safety Concern Thresholds (SCTs), which were introduced by the Product Quality Research Institute (PQRI) leachables and extractables working group.  These are defined as the dose below which an individual leachable would not elicit effects, carcinogenic or otherwise, which could constitute a safety concern.1

The route of administration and the degree of product-packaging contact help determine SCTs. To assign risk from leachable species to the pharmaceutical product under investigation, the FDA developed the following matrix:2 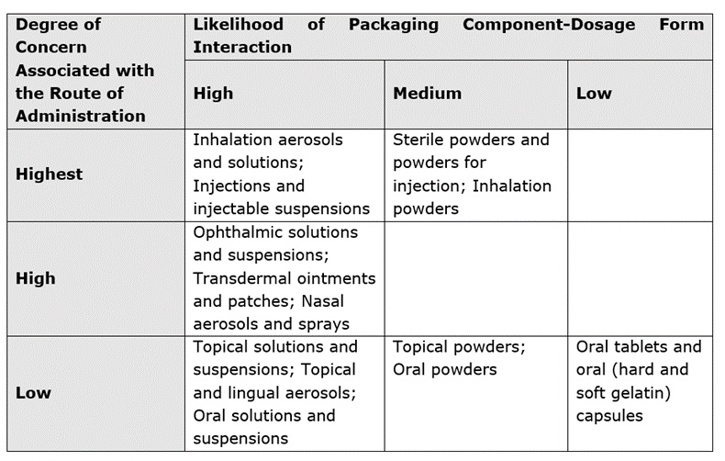 Extractables and Leachables: Sources and Examples

A wide range of materials comprise the components used to manufacture and store a pharmaceutical product, summarised in Table 1.

Table 1: Points of contact and materials that interact with pharmaceutical products.

The range of extractable and leachable species is similarly abundant, including:

Extractables and leachables can be broadly grouped as follows:

The basic structure of an E&L study is shown in Figure 2.

Figure 2:       Overview of the E&L study and the techniques employed.

A thorough understanding of the production process is required when considering which manufacturing components to study. Key parameters to consider are the equipment utilised, processing conditions involved and solvents used.

The complexity of the storage system can drastically affect the scale of an extractables study. Simple systems (e.g. plastic bottles with screw caps) have a limited number of components in comparison to more intricate systems(e.g. pump dispensers, which could contain O-rings and springs).

Extractions are performed with a range of solvents, to generate a pool of extractable species comparable to those observed during the subsequent leachables study.

Where appropriate, more solvents can be used.  Using powerful solvents is discouraged, as these could damage the materials under investigation and create unrealistically large numbers of extractables.

Components are extracted under reflux for 3 hours. However, such conditions may be too harsh for delicate materials and this should be investigated prior to starting the study.  Extraction with gentler solvents, Soxhlet extraction and extraction by sonication, or combinations thereof, are viable alternatives.

The leachables study monitors species migrating from manufacturing and packaging components into the pharmaceutical product during its shelf life. The E&L study usually running in parallel with a stability trial with pre-defined time-points.

Sample numbers for a leachables study will vary but will always comprise one control sample and one stability sample. In comparison to the extractables study, the sample matrix is far more complex and is dependent on the product under investigation. This inevitably impacts sample preparation and ease of analysis.

These formulations should be the simplest to prepare and analyse, being water-based.  However, water-soluble components such as sugars and salts may impact sample analysis.

Headspace GC-MS: No sample preparation is required; target analytes are measured by sampling the headspace above the sample. Matrix effects are minimal.

ICP-MS: With excellent detection limits (parts per billion and lower), matrix effects can be largely overcome through dilution or acid digestion. With dilution, sample filtration or centrifugation may be needed if insoluble particulates are encountered.

LC-MS: Samples are diluted with water or water: methanol solutions. Sample viscosity can be overcome by high dilution but may impact analytical detection limits. Where particulates are observed, filtering or centrifugation is required. Depending on concentrations of the API and unretained species such as sugars and salts, the eluent flow may need to divert to waste at points during the run to protect the MS hardware.

Direct injection GC-MS: Samples are initially diluted in water, followed by Liquid-Liquid Extraction (LLE) into dichloromethane (DCM), which can then be concentrated for analysis.  Water-soluble and low volatility components such as sugars and salts are not carried across in large quantities, but residual levels may be injected into the GC-MS system. This may impact analysis and affect the hardware (material deposition).

Intended for ingestion, formulations are expected to be soluble or readily disintegrated.  Excipients may be water-soluble (e.g. lactose) or insoluble (e.g. magnesium stearate).

Headspace GC-MS:  Similar to oral formulations (liquid). If sample comes as a single unit(e.g. tablet or lozenge) it should be ground prior to analysis.

ICP-MS: Similar to oral formulations (liquid), with high probability of insoluble materials if dilution is chosen as the method of sample preparation (filtration/centrifugation required).

Direct injection GC-MS:  Similar to Oral formulations (liquid), but samples may be suspended as opposed to diluted in water prior to LLE.  There is a greater chance for water-insoluble excipients transferring into the organic layer, meaning a greater risk of matrix effects on the hardware and analysis.

A diverse range of products, including blood products, vaccines and gene therapies, biopharmaceuticals will typically be supplied in a liquid form tolerable to the human body.  However, large amounts of high-volatility and high-molecular weight materials, such as buffer salts, polypeptides, proteins and cells, are expected. These all can drastically affect sample preparation.

ICP-MS: Similar to oral formulations (liquid), with sample digestion being the preferable mode of sample preparation rather than dilution.

LC-MS: Polypeptides and proteins that would precipitate on the LC column and buffer salts that would precipitate at the MS source, are removed during sample preparation by mixing with acetonitrile prior to analysis. This will drastically reduce levels injected onto the LC-MS system, but may not eliminate them completely. Residual matrix effects are expected, alongside those from smaller molecular weight components.

Direct injection GC-MS: Same issues as with LC-MS analysis of biopharmaceuticals. Buffer salts should be retained in the aqueous layer during LLE. Crashing of proteins with a strong acid, e.g. perchloric acid, will be required.

Topical formulations are designed to be absorbed through the skin, with all components expected to be solubilised. The viscosity of water and alcohol-based gels- may be a practical issue due to the cross-linking agents.

Headspace GC-MS: Similar to oral formulations (liquid), formulations will be analysed via the head-space above the sample.

ICP-MS: Similar to oral formulations (liquid). Gel viscosity can be overcome through dilution but may have an impact on detection limits.

LC-MS: Similar to oral formulations (liquid). Gel viscosity can be overcome through dilution but may impact on detection limits.

Direct injection GC-MS: Similar to oral formulations (liquid). Cross-linking agents within the gel could make LLE more difficult with layer separation and may extract into the organic layer, potentially contaminating the injector port and GC column.

Oil-based formulations such as creams, lotions and emollients are designed to be absorbed into the skin. Hence, formulation components are expected to be largely solubilised. However, oil-based formulations are not water soluble, making several analytical techniques difficult or impossible for leachables analysis.  A different approach is therefore required.

Sample preparation should be adapted to counteract matrix effects in the first instance.  Where this is demonstrably not possible, the simulated study provides a route to analysis.

The composition of the mimic formulation will depend on the product under investigation.  Water-insoluble components can be removed completely, along with those which are shown to produce insurmountable matrix effects.

Simulated studies for water-based formulations should seek to replicate the formulation as fully as possible, removing those excipients proven to have detrimental and insurmountable matrix effects.

Simulated studies for oil-based formulations would use pH-adjusted water mixtures with propylene glycol or glycerol as formulation mimic.

Simulated studies aim to generate mimic formulations which can be analysed in the same manner as a liquid oral formulation, to generate a leachables profile which would have been unattainable otherwise.

Extractables and leachables studies vary greatly in their degree of complexity. A deep understanding of the product and the materials to which it will be exposed during its shelf life are required for a successful study.

For the extractables study, key parameters to consider are the number, composition and mass of components analysed, which will guide the extractions performed.

For the leachables study, the product under investigation will dictate the ease of sample preparation. The study should aim to analyse the product as manufactured. Where this is not possible, simulated studies are an acceptable course of action.

With thorough planning and in-depth knowledge in place from the beginning, the E&L study can accommodate a wide range of formulations, ensuring that patient safety is ultimately maintained.